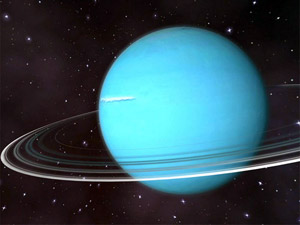 The planet Uranus was discovered in the 13th March 1781.Till the discovery of Uranus the existence of sun, moon, mercury, Venus, Saturn, mars, and Jupiter were taken into consideration. However after Uranus was discovered it brought a great change in the society as well as the science and astronomy. The discovery of Uranus coincided with the discovery of electricity and the broader research orientated scientific methodologies. Hersche the musician discovered this planet. Uranus stands for the symbol of testimony and progression. Its symbol also represents the mythology of Thor, the Greek God and Lord Indra, the lord of lightning.

The zodiac sign Aquarius is dominated by Uranus. In Greek mythology, Uranus is the personification of the heavens and the night sky. It brings out the superior form of intellectual and intelligence from within us. It is related to the psychology of man. Uranus represents the nervous system of an individual. It is at a distance of 1,782 million miles from the Sun. Uranus brings within us refined and more intuitive and intellectual faculties. People who are influences under Uranus are either destructive in nature, or work towards progress of nature. The complete cycle of Uranus takes 84 years- same as one human life span.

Uranus helps to govern change – any kind of intellectual change, any radical and unexpected change. Since Uranus has been attributed with these values, any type of change or reformation is linked with Uranus. Since it is one of the three outer planets including Neptune and Pluto, it is considered a transpersonal planet. Unlike Neptune and Pluto whose cycles are much longer, some individuals experience the return of Uranus to its previous position before time. When we are 21 years of age, we witness the transition from teenage to adulthood, a time when responsibility and the approaching duties of family life are thrust upon us. At age 42 the “mid-life crisis” is associated with the half-circuit of Uranus. And we are of age 63 many consider retirement from working life. Here we can find a co relation of Uranus on us. The vast majority of humanity may not see the full return of Uranus; however some who are lucky may see the same.