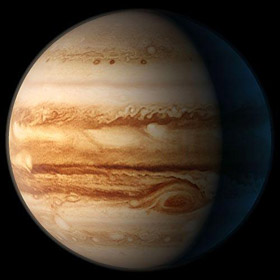 Jupiter is the king of gods in roman mythology, and their guardian and protector, and his symbol is the thunderbolt.It is the first of a personal planet, tolerant and a planet which is expansive. It symbolizes knowledge and wisdom, morality, hope, gratitude, honor and the law. It is also associated with good fortune, prosperity, growth and expansion of an individual. Jupiter rules a person’s inner sense of justice and morality. Freedom, exploration, and joviality are commonly associated with Jupiter. It rules over the astrological signs Sagittarius, Pisces and is also exalted in Cancer.

Jupiter has great influence over the physical, intellectual, spiritual, cultural and materialistic character of man. It signifies luck, growth and prosperity, education and fame. Jupiter is ones favorite planet because it symbolizes fame, optimistic nature, mental and spiritual growth. Jupiter is known to be a societal planet within the astrological charts it does not affect the personality make up, but is social in nature. It contains the best of what life has in store for us.

Jupiter's greatest aspects are seen as its good humor, good will and mercy, but can be negatively viewed due to blind optimism, excess, irresponsibility and overindulgence. It represents the way in which we express our tolerance and generosity.

Jupiter in different cultural astrology's, such as Chinese astrology where it is ruled by the element wood or Indian astrology is known as Guru or Brihaspati and is seen as the 'great teacher'. Jupiter influences weight problems, cholesterol, intoxication, and diabetes. People who are influenced by Jupiter have good careers in medicine, law, and education.