Moon in the signs of the Zodiac. Lunar birthday 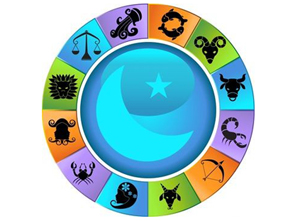 The moon, just like the sun, is constantly moving from one Zodiac sign to another. But if the sun stays in each Zodiac sign for approximately a month, the moon moves from sign to sign every two or three days. Only once a month, at the time of a "new" moon and the next to it day or two, the moon is in the same sign as the sun.

The orientation of our emotions is very dependent on the position of the moon in Zodiac, as well as our interest and inclination to this or another sphere of life and activity.

What does the moon do? It shows what exactly people perceive. Moon is the "Yin" planet, night luminary, it opens the "Yin" number of planets and is associated with the unconscious inner world of a person, that's why by the position of the moon in the natal chart we can judge what will this or another person unconsciously notice, and how he will be unconsciously reacting. The moon as a fastest planet, is showing the most rapid response, ie, the first reaction of a person to any event.

Also the moon shows what a given person will tend to see in any event, what will be the first to perceive, to which reactions a given person will be subconsciously ready. It is very difficult to see a pure manifestation of the moon - to achieve this, the rational control has to be taken away. In some cases, the reaction of moon can be clearly seen under the strong influence of alcohol or after a strong shock - a state when the rational principles in person are destroyed.

In this kind of cases the moon is explicitly manifested. In the ordinary state it is heavily disguised, because the conscious behavior is dominant, especially for men, for women - to a lesser extent, among them the moon can be seen in the normal state of consciousness, so, of course, any descriptions of the planets in signs - are just a purified patterns of a human behavior, because in life the influences of different planets are mixed. And therefore rarely those descriptions that we will give are found in their pure forms. They appear as some sort of trends.

You can rarely see in a person a pure full-description. Normally only one or two features are more or less clearly manifested, and when you will study the synthesis of all the manifestations of the planets, it will be molded into a form closer to a real human behavior.

Planets in signs - are some sort of analytical nodes, parts of which we will try to gather.

Moon in Aries - Prone to conflicts

Moon in Virgo - Rational and pedantic

Moon in Libra - Peace and harmony

Moon in Sagittarius - Days of comfort

Moon in Capricorn - Duty and responsibility

Moon in Pisces - Romantic and dreamy